Magnetism and Superconductivity Observed to Exist in Harmony

Magnetism and Superconductivity Observed to Exist in Harmony

August 28, 2008
Magnetism and Superconductivity Observed to Exist in Harmony

Physicists at Los Alamos National Laboratory, along with colleagues at institutions in Switzerland and Canada, have observed, for the first time in a single exotic phase, a situation where magnetism and superconductivity are necessary for each other's existence.

Physicists have seen the battle for supremacy between the competing states of magnetism and superconductivity as one in which no truce could be struck. This perplexing dilemma has thwarted scientists' quest for the resistance-free flow of electrons, and, with it, the vast potential in energy savings that superconductivity holds for ultra-efficient power transmission, magnetic resonance imaging (MRI) technology, and other applications.

In the current online advance edition of the journal Science, the international team of scientists reports the simultaneous observation of both states in a compound containing the elements cerium, cobalt, and indium (CeCoIn5) at a temperature close to absolute zero about 460 degrees below zero, Fahrenheit. Coauthor Andrea Bianchi, who is now based at the University of Montreal, was the first to see this phase at Los Alamos National Laboratory in 2003.

"This coexistence is an exotic superconducting state that has not been observed in any other superconducting material," said Los Alamos scientist Roman Movshovich, one of the paper's authors. "It shows a very strong link between superconductivity and magnetism."

Scientists understand superconductivity as a phenomenon that occurs when electrons spinning in one direction form pairs with electrons spinning in the opposite direction, usually at very low temperatures. These pairs, in turn, combine with each other to form a new superconducting state of matter where electrons move resistance-free through the material. Superconductivity is a manifestation of interactions that take place between few particles (electrons and atoms) that reveal themselves on a macroscopic scale, in samples that we can see and touch. Magnetism, where electrons' magnetic spins are fixed in space in an orderly fashion, requires participation of the same electrons and therefore generally competes with superconductivity.

But why, in this particular case, magnetism and superconductivity appeared at the same time in the same compound is still a mystery. "It's not clear what the origin of this state is, or what creates or modifies it," Movshovich said.

The scientists applied a high magnetic field to a crystal of this compound synthesized by Bauer and his colleague John Sarrao at Los Alamos, suppressing its superconductivity. They found that, as a consequence, the crystal also lost its magnetism. This evidence suggests that without superconductivity, magnetism is not possible in CeCoIn5. The converse, however, isn't necessarily true.

It appears that superconductivity could occur even in the absence of magnetism, either at lower magnetic field, or at a slightly higher temperature, Bauer said.

The extraordinary "cleanliness" inherent in the quality of the crystal grown in the Materials Physics and Applications division at Los Alamos was one of the reasons the team was able to coax these coupled states from the compound, Movshovich said. The importance of cleanliness was demonstrated in one of this team's previous studies where minute amount of impurities were introduced on purpose, and such samples did not display this fragile superconducting/magnetic state.

With these "clean" crystals, a group led by Michel Kenzelmann of the Paul Scherrer Institute and the Swiss Federal Institute of Technology, both in Switzerland, probed the compound with a beam of neutrons to elucidate its physical properties. Though neutrons don't carry a charge like electrons and protons do, they still have a magnetic spin that interacts with magnetic order inside a compound. Based on the direction of the neutrons when scattered from the crystal, the team was able to deduce the magnetic structure of the coupled magnetic/superconducting state.

CeCoIn5 is what's known as a heavy fermion material because at low temperatures its electrons act as if they are much heavier than they really are, due to interactions with magnetic ions (Ce in this case) in the lattice structure of the material. And although the experiments in this latest round of research took place at low temperatures, electrons in both heavy fermion compounds and high-temperature superconductors are believed to pair up and move in much the same way, and the fundamental knowledge obtained will contribute to our general understanding of the superconducting phenomena. The team's findings are likely to trigger further studies in similar compounds.

Re: Magnetism and Superconductivity Observed to Exist in Harmony

Take a look at Nevyn's MBL viewer of Mathis' atoms. Notice the alignment of single discs and double discs: 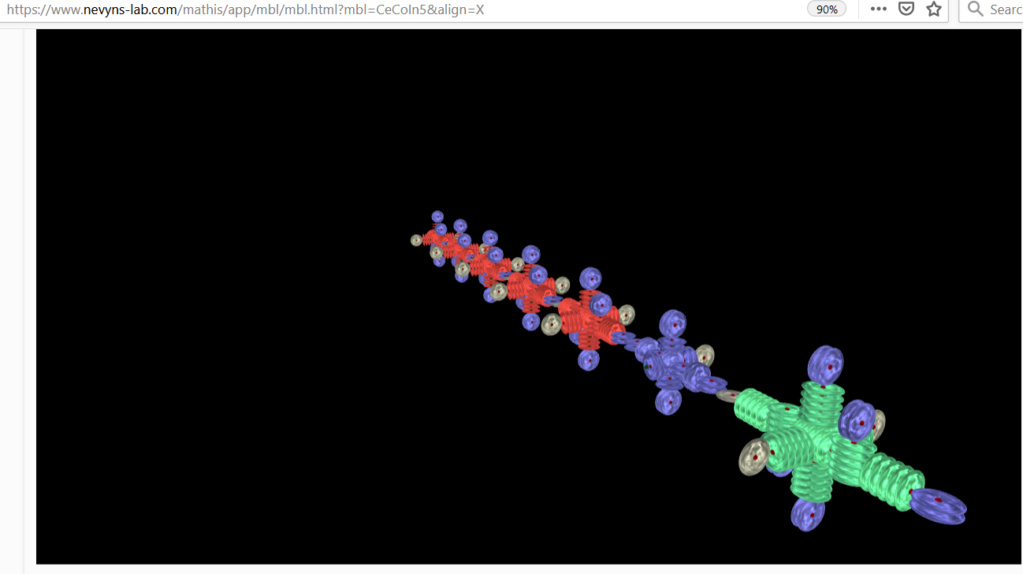