Came across this recent R package. Looks like it was a school project at UCLA recently. Has pretty good coverage of topics and areas of focus that Miles (and team) has touched on over the years. Worth checking out especially the SOM functions:

Chemometrics and computational physics are concerned with the analysis of data arising in chemistry and physics experiments, as well as the simulation of physico-chemico systems. Many of the functions in base R are useful for these ends.

The book Chemometrics with R by Ron Wehrens, ISBN: 978-3-642-17840-5, Springer, 2011, provides an introduction to multivariate statistics in the life sciences, as well as coverage of several specific topics from the area of chemometrics; the examples in the book are possible to reproduce using the package ChemometricsWithR.

The book Modern Statistical Methods for Astronomy With R Applications by Eric D. Feigelson and G. Jogesh Babu, ISBN-13: 9780521767279, Cambridge, 2012, provides an introduction to statistics for astronomers and an overview of the foremost methods being used in astrostatistical analysis, illustrated by examples in R.

The book by Kurt Varmuza and Peter Filzmoser, Introduction to Multivariate Statistical Analysis in Chemometrics, ISBN 978-1-420-05947-2, CRC Press, 2009, is associated with the package chemometrics.

A special issue of R News with a focus on R in Chemistry was published in August 2006. A special volume of Journal of Statistical Software (JSS) dedicated to oscopy and Chemometrics in R was published in January 2007.

Please let us know if we have omitted something of importance, or if a new package or function should be mentioned here.

Linear models can be fitted (via OLS) with lm() (from stats). A least squares solution for x in Ax = b can also be computed as qr.coef(qr(A), b).
The package nnls provides a means of constraining x to non-negative or non-positive values; the package bvls allows other bounds on x to be applied.
Functions for isotonic regression are available in the package Iso, and are useful to determine the unimodal vector that is closest to a given vector x under least squares criteria.
Heteroskedastic linear models can be fit using the gls() function of the nlme package.

The nls() function (from stats) as well as the package minpack.lm allow the solution of nonlinear least squares problems.
Correlated and/or unequal variances can be modeled using the gnls() function of the nlme package and by nlreg.

The PTAk package provides functions for Principal Tensor Analysis on k modes. The package includes also some other multiway methods: PCAn (Tucker-n) and PARAFAC/CANDECOMP.
Multivariate curve resolution alternating least squares (MCR-ALS) is implemented in the package ALS.
The alsace package provides MCR-ALS support for Liquid chromatography with PhotoDiode Array Detection (LC-DAD) data with many injections, with features for peak alignment and identification.
The package drc provides functions for the analysis of one or multiple non-linear curves with focus on models for concentration-response, dose-response and time-response data.

Principal component analysis (PCA) is in the package stats as functions princomp(). Some graphical PCA representations can be found in the psy package.
The homals package provides nonlinear PCA and, by defining sets, nonlinear canonical correlation analysis (models of the Gifi-family).
A desired number of robust principal components can be computed with the pcaPP package. The package elasticnet is applicable to sparse PCA. The package fpca can be applied to restricted MLE for functional PCA.
See the Multivariate task view for further packages dealing with PCA and other projection methods.

Factor analysis (FA) is in the package stats as functions factanal(); see Psychometrics task view for details on extensions.

The Cluster task view provides a list of packages that can be used for clustering problems.

The CHNOSZ package provides functions for calculating the standard Gibbs energies and other thermodynamic properties, and chemical affinities of reactions between species contained in a thermodynamic database.

The package rcdk allows the user to access functionality in the Chemistry Development Kit (CDK), a Java framework for cheminformatics. This allows the user to load molecules, evaluate fingerprints (via the package fingerprint), calculate molecular descriptors and so on. In addition, the CDK API allows the user to view structures in 2D. The rcdklibs package provides the CDK libraries for use in R.
The rpubchem package gives access to PubChem data (compounds, substance, assays).
ChemmineR is a cheminformatics toolkit for analyzing small molecules in R. Its add-on packages include fmcsR for mismatch tolerant maximum common substructure matching, eiR for accelerated structure similarity searching; bioassayR for analyzing bioactivity data, and ChemmineOB for accessing OpenBabel functionalities from R.
The webchem package allows users to retrieve chemical information from various sources on the web and to interact with various APIs. Sources include: Chemical Identifier Resolver , ChemSpider , PubChem , Chemical Translation Service , PAN Pesticide Database , Alan Wood's Compendium of Pesticide Common Names , PHYSPROP Database , ETOX , PPDB , and ChemIDplus .

Functions for visualization and analysis of Fluorescence Lifetime Imaging Microscopy (FLIM) datasets are available in the package TIMP.

The EEM reads raw EEM data and prepares it for further analysis.

The package Bchron creates chronologies based on radiocarbon and non-radiocarbon dated depths.

The astrodatR package collects 19 datasets from contemporary astronomy research, many of which are described in the aforementioned textbook ‘Modern Statistical Methods for Astronomy with R Applications’.
The astrolibR package presents an R interface to low-level utilities and codes from the Interactive Data Language (IDL) Astronomy Users Library .
The CRAC collects R functions for cosmological research, with its main functions being similar to the python library, cosmolopy.
The RobPer package calculates periodograms based on (robustly) fitting periodic functions to light curves.
The package snapshot contains functions for reading and writing N-body snapshots from the GADGET code for cosmological N-body/SPH simulations.
The package UPMASK performs unsupervised photometric membership assignment in stellar clusters using, e.g., photometry and spatial positions.
The solaR package provides functions to determine the movement of the sun from the earth and to determine incident solar radiation.
The FITSio package provides utilities to read and write files in the FITS (Flexible Image Transport System) format, a standard format in astronomy.
The stellaR package manages and displays stellar tracks and isochrones from the Pisa low-mass database.
The astroFns provides miscellaneous astronomy functions, utilities, and data.
The cosmoFns contains standard expressions for distances, times, luminosities, and other quantities useful in observational cosmology, including molecular line observations.
The astro package provides tools for astronomy; functions provided may be grouped into 4 main areas: cosmology, FITS file manipulation, the Sersic function and general (plotting and scripting) tools.
The celestial package includes a number of common astronomy conversion routines, particularly the HMS and degrees schemes.
The SCEPtER package is used to estimate stellar mass and radius given observational data of effective temperature, [Fe/H], and astroseismic parameters.
The lira package performs Bayesian linear regression and forecasting in Astronomy, accounting for all kinds of errors and correlations in the data.
The astrochron package contains routines for astronomical time scale construction, time series analysis, time scale development, and paleoclimate analysis.
The SPADAR package provides functions to create all-sky grid plots of widely used astronomical coordinate systems (equatorial, ecliptic, galactic) and scatter plots of data on any of these systems, including on-the-fly system conversion.
The SCEPtERbinary allows for estimating the stellar age for double-lined detached binary systems, adopted from the effective temperature, the metallicity [Fe/H], the mass, and the radius of the two stars.
The Astrostatistics and Astroinformatics Portal is an R-centric collection of information regarding statistical analysis in astronomy.
Hans Werner Borchers has a page on Astronomy modules and links for R, Python, and Julia .

The planar package provides code to simulate reflection and transmission at a multilayer planar interface.
The dielectric package defines some physical constants and dielectric functions commonly used in optics and plasmonics.

The solaR package provides functions to simulate and model systems involved in the capture and use of solar energy, including photovoltaics.

The AquaEnv package is a toolbox for aquatic chemical modelling focused on (ocean) acidification and CO2 air-water exchange.
See the Environmetrics task view for further related packages related to water and soil chemistry.

The eChem package provides functions to simulate voltammetry, chronoamperometry and chronocoulometry experiments, which may be useful in courses in analytical chemistry.

Re: Chemometrics and Computational Physics (R package by Katherine Mulllen at UCLA)

Hi Cr6, that’s a fine addition to References. Including links to some mighty nice packages. Here’s something for Team Miles to consider - SPADAR. 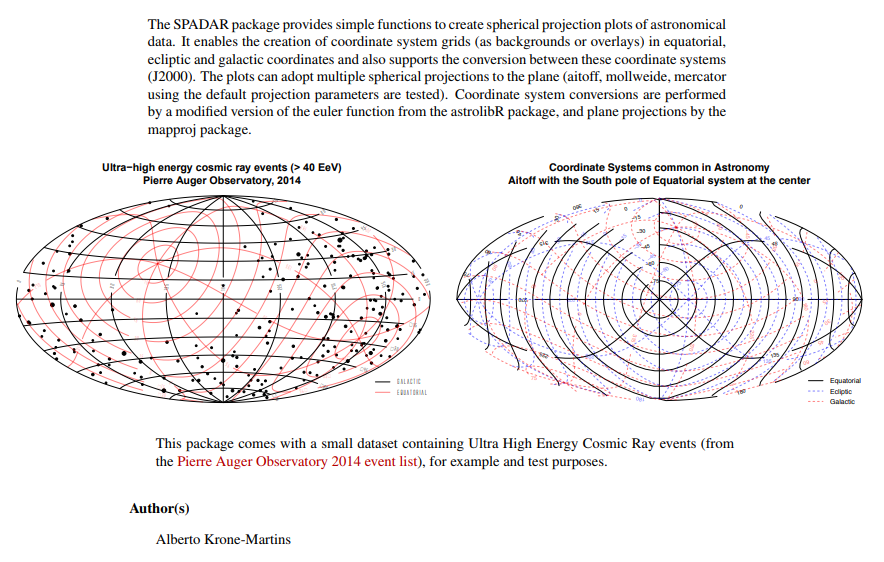