Method and apparatus for altering a region in the earth's atmosphere, ionosphere, and/or magnetosphere - Patent US 4,686,605

Method and apparatus for altering a region in the earth's atmosphere, ionosphere, and/or magnetosphere - Patent US 4,686,605

Method and apparatus for altering a region in the earth's atmosphere, ionosphere, and/or magnetosphere
US 4686605 A
Abstract
A method and apparatus for altering at least one selected region which normally exists above the earth's surface. The region is excited by electron cyclotron resonance heating to thereby increase its charged particle density. In one embodiment, circularly polarized electromagnetic radiation is transmitted upward in a direction substantially parallel to and along a field line which extends through the region of plasma to be altered. The radiation is transmitted at a frequency which excites electron cyclotron resonance to heat and accelerate the charged particles. This increase in energy can cause ionization of neutral particles which are then absorbed as part of the region thereby increasing the charged particle density of the region. 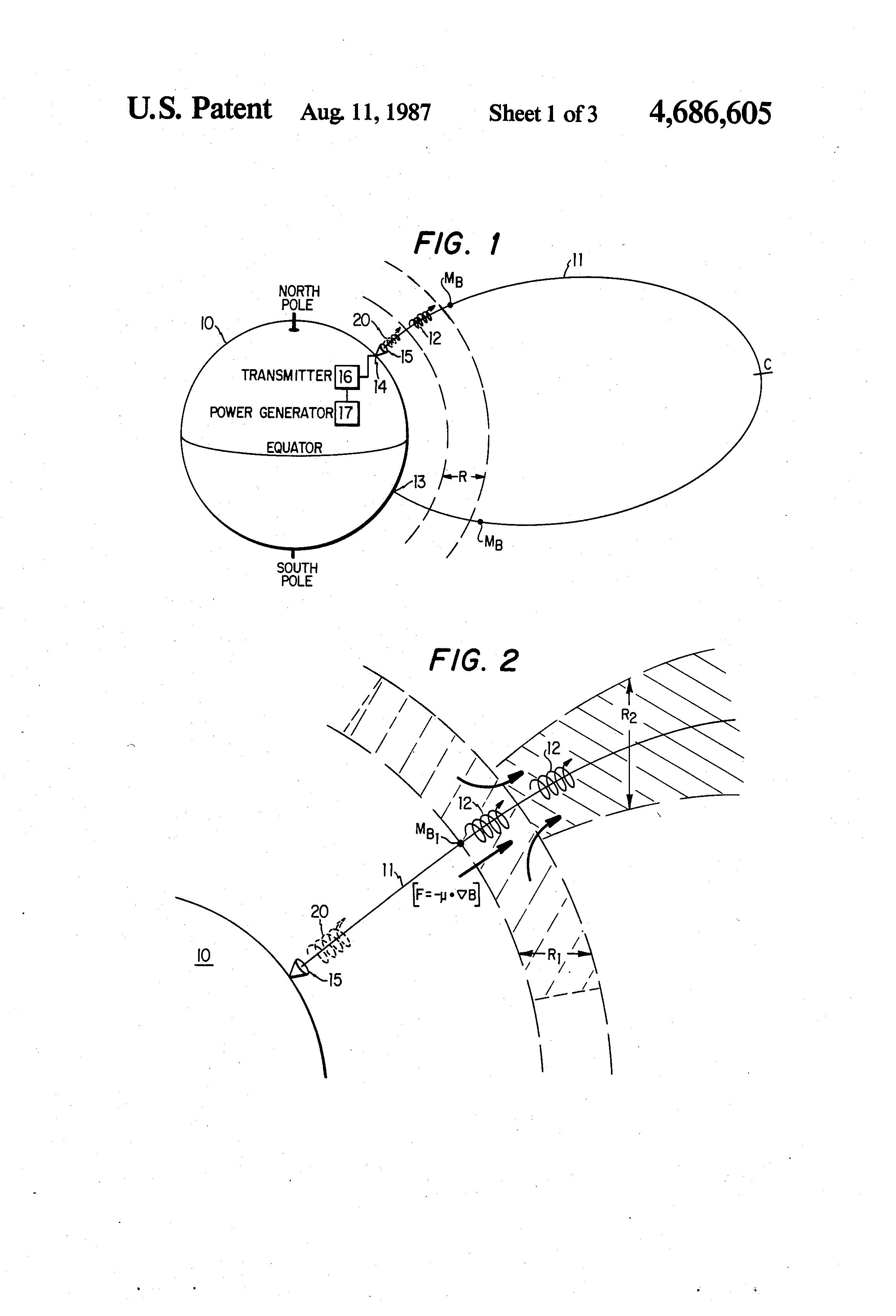 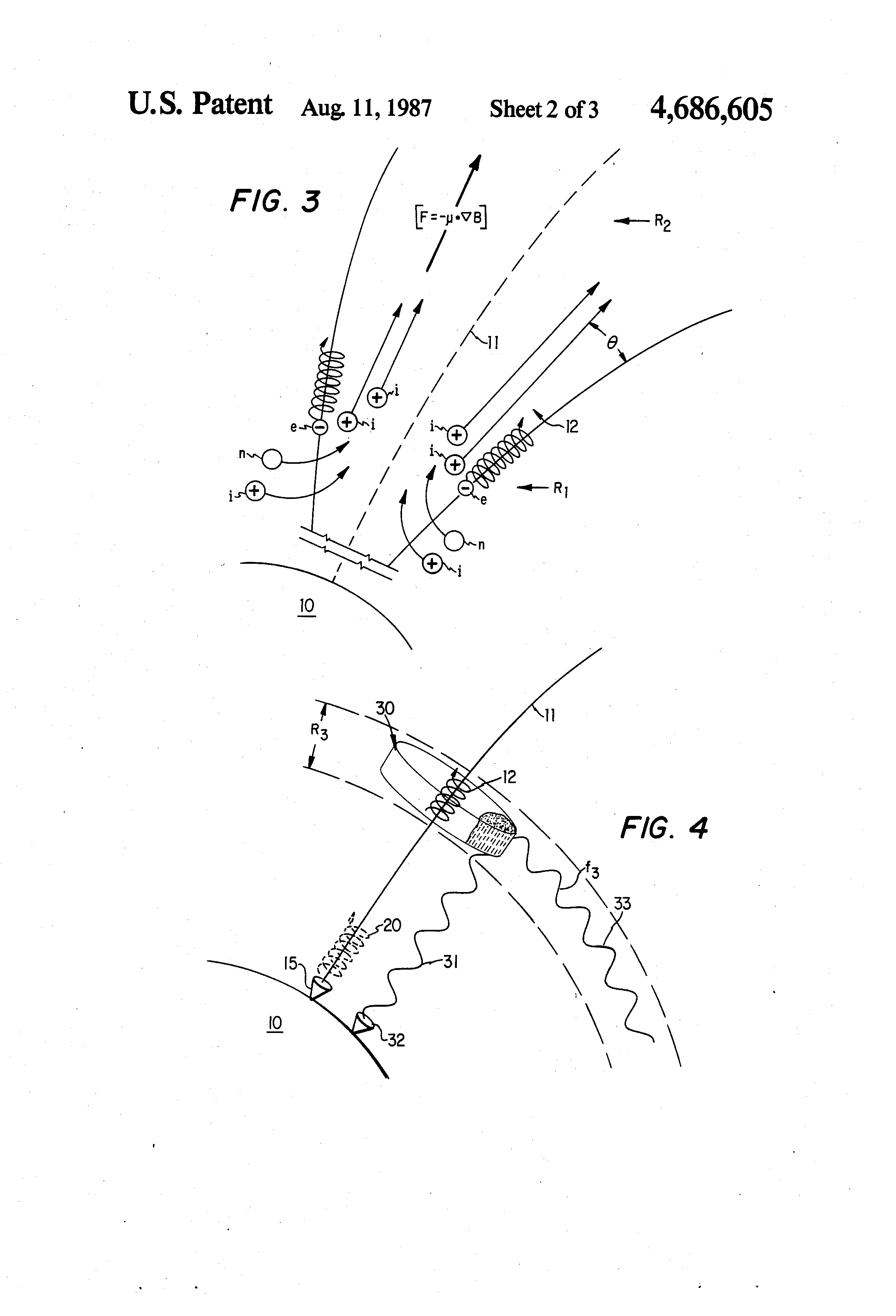 In the past several years, substantial effort has been made to understand and explain the phenomena involved in belts of trapped electrons and ions, and to explore possible ways to control and use these phenomena for beneficial purposes. For example, in the late 1950's and early 1960's both the United States and U.S.S.R. detonated a series of nuclear devices of various yields to generate large numbers of charged particles at various altitudes, e.g., 200 kilometers (km) or greater. This was done in order to establish and study artifical belts of trapped electrons and ions. These experiments established that at least some of the extraneous electrons and ions from the detonated devices did become trapped along field lines in the earth's magnetosphere to form artificial belts which were stable for prolonged periods of time. For a discussion of these experiments see "The Radiation Belt and Magnetosphere", W. N. Hess, Blaisdell Publishing Co., 1968, pps. 155 et sec.

Other proposals which have been advanced for altering existing belts of trapped electrons and ions and/or establishing similar artificial belts include injecting charged particles from a satellite carrying a payload of radioactive beta-decay material or alpha emitters; and injecting charged particles from a satellite-borne electron accelerator. Still another approach is described in U.S. Pat. No. 4,042,196 wherein a low energy ionized gas, e.g., hydrogen, is released from a synchronous orbiting satellite near the apex of a radiation belt which is naturally-occurring in the earth's magnetosphere to produce a substantial increase in energetic particle precipitation and, under certain conditions, produce a limit in the number of particles that can be stably trapped. This precipitation effect arises from an enhancement of the whistler-mode and ion-cyclotron mode interactions that result from the ionized gas or "cold plasma" injection.

It has also been proposed to release large clouds of barium in the magnetosphere so that photoionization will increase the cold plasma density, thereby producing electron precipitation through enhanced whistler-mode interactions.

However, in all of the above-mentioned approaches, the mechanisms involved in triggering the change in the trapped particle phenomena must be actually positioned within the affected zone, e.g., the magnetosphere, before they can be actuated to effect the desired change.

The earth's ionosphere is not considered to be a "trapped" belt since there are few trapped particles therein. The term "trapped" herein refers to situations where the force of gravity on the trapped particles is balanced by magnetic forces rather than hydrostatic or collisional forces. The charged electrons and ions in the ionosphere also follow helical paths around magnetic field lines within the ionosphere but are not trapped between mirrors, as in the case of the trapped belts in the magnetosphere, since the gravitational force on the particles is balanced by collisional or hydrostatic forces.

In recent years, a number of experiments have actually been carried out to modify the ionosphere in some controlled manner to investigate the possibility of a beneficial result. For detailed discussions of these operations see the following papers: (1) Ionospheric Modification Theory; G. Meltz and F. W. Perkins; (2) The Platteville High Power Facility; Carrol et al.; (3) Arecibo Heating Experiments; W. E. Gordon and H. C. Carlson, Jr.; and (4) Ionospheric Heating by Powerful Radio Waves; Meltz et al., all published in Radio Science, Vol. 9, No. 11, November, 1974, at pages 885-888; 889-894; 1041-1047; and 1049-1063, respectively, all of which are incorporated herein by reference. In such experiments, certain regions of the ionosphere are heated to change the electron density and temperature within these regions. This is accomplished by transmitting from earth-based antennae high frequency electromagnetic radiation at a substantial angle to, not parallel to, the ionosphere's magnetic field to heat the ionospheric particles primarily by ohmic heating. The electron temperature of the ionosphere has been raised by hundreds of degrees in these experiments, and electrons with several electron volts of energy have been produced in numbers sufficient to enhance airglow. Electron concentrations have been reduced by a few percent, due to expansion of the plasma as a result of increased temperature.

In the Elmo Bumpy Torus (EBT), a controlled fusion device at the Oak Ridge National Laboratory, all heating is provided by microwaves at the electron cyclotron resonance interaction. A ring of hot electrons is formed at the earth's surface in the magnetic mirror by a combination of electron cyclotron resonance and stochastic heating. In the EBT, the ring electrons are produced with an average "temperature" of 250 kilo electron volts or kev (2.5×109 K) and a plasma beta between 0.1 and 0.4; see, "A Theoretical Study of Electron--Cyclotron Absorption in Elmo Bumpy Torus", Batchelor and Goldfinger, Nuclear Fusion, Vol. 20, No. 4 (1980) pps. 403-418.

Electron cyclotron resonance heating has been used in experiments on the earth's surface to produce and accelerate plasmas in a diverging magnetic field. Kosmahl et al. showed that power was transferred from the electromagnetic waves and that a fully ionized plasma was accelerated with a divergence angle of roughly 13 degrees. Optimum neutral gas density was 1.7×1014 per cubic centimeter; see, "Plasma Acceleration with Microwaves Near Cyclotron Resonance", Kosmahl et al., Journal of Applied Physics, Vol. 38, No. 12, Nov., 1967, pps. 4576-4582.
DISCLOSURE OF THE INVENTION

The present invention provides a method and apparatus for altering at least one selected region which normally exists above the earth's surface. The region is excited by electron cyclotron resonance heating of electrons which are already present and/or artifically created in the region to thereby increase the charged particle energy and ultimately the density of the region.

In one embodiment this is done by transmitting circularly polarized electromagnetic radiation from the earth's surface at or near the location where a naturally-occurring dipole magnetic field (force) line intersects the earth's surface. Right hand circular polarization is used in the northern hemisphere and left hand circular polarization is used in the southern hemisphere. The radiation is deliberately transmitted at the outset in a direction substantially parallel to and along a field line which extends upwardly through the region to be altered. The radiation is transmitted at a frequency which is based on the gyrofrequency of the charged particles and which, when applied to the at least one region, excites electron cyclotron resonance within the region or regions to heat and accelerate the charged particles in their respective helical paths around and along the field line. Sufficient energy is employed to cause ionization of neutral particles (molecules of oxygen, nitrogen and the like, particulates, etc.) which then become a part of the region thereby increasing the charged particle density of the region. This effect can further be enhanced by providing artificial particles, e.g., electrons, ions, etc., directly into the region to be affected from a rocket, satellite, or the like to supplement the particles in the naturally-occurring plasma. These artificial particles are also ionized by the transmitted electromagnetic radiation thereby increasing charged particle density of the resulting plasma in the region" />

Re: Method and apparatus for altering a region in the earth's atmosphere, ionosphere, and/or magnetosphere - Patent US 4,686,605

This site provides some "debunk" material on this patent.

Skeptic's take on HAARP:
(Note that the Sun has been dumping a lot of extra CME material lately.)

Could HAARP impact the weather?

According to the HAARP website, “The HAARP facility will not affect the weather. Transmitted energy in the frequency ranges that will be used by HAARP is subject to negligible absorption in either the troposphere or the stratosphere — the two levels of the atmosphere that produce the earth’s weather.” HAARP’s transmissions do interact with the near-vacuum region of the ionosphere. However, the “downward coupling from the ionosphere to the stratosphere/troposphere is extremely weak, and no association between natural ionospheric variability and surface weather and climate has been found, even at the extraordinarily high levels of ionospheric turbulence that the Sun can produce during a geomagnetic storm. If the ionospheric storms caused by the Sun itself don’t affect the surface weather, there is no chance that HAARP can do so either.”

How long do the effects of ionospheric heating last?

The HAARP website says, “Since the ionosphere is, inherently, a turbulent medium that is being both ‘stirred up’ and renewed by the sun, artificially induced effects are quickly obliterated. Depending on the height within the ionosphere where the effect is originally produced, these effects are no longer detectable after times ranging from less than a second to 10 minutes.” Once again, local changes to the ionosphere resulting from HAARP are many orders of magnitude less than those global changes caused by variations in the Sun’s energy output. According to the HAARP Environmental Impact Statement, there are no significant impacts to the ionosphere, and therefore, no mitigation measures are required.