Suramin as a possible novel treatment for Autism

Suramin as a possible novel treatment for Autism

Interesting finding from an older drug. Affects ATP use which via cycles basically powers our minds and thinking.
-------
Background

Suramin is a medication used to treat African sleeping sickness and river blindness.[1][2] It is the treatment of choice for sleeping sickness without central nervous system involvement.[3] It is given by injection into a vein.[4]

The molecular formula of suramin is C51H40N6O23S6. It is a symmetric molecule in the center of which lies a urea (NH–CO–NH) functional group. Suramin contains six aromatic systems – four benzene rings, sandwiched by a pair of naphthalene moieties – plus four amide functional groups (in addition to the urea) and six sulfonic acid groups. When given as a medication, it is usually delivered as the sodium sulfonate salt as this formulation is water-soluble, though it does deteriorate rapidly in air.[12]

The mechanism of action for suramin is unclear, however, it is thought that parasites are able to selectively uptake suramin via receptor-mediated endocytosis of drug that is bound to low-density lipoproteins and to a lesser extent, other serum proteins.[12] Once inside parasites, suramin combines with proteins, especially trypanosomal glycolytic enzymes to inhibit energy metabolism.[14]
https://en.wikipedia.org/wiki/Suramin
----------

Dengue fever is a major health concern worldwide. The virus encoded non-structural protein 3 (NS3) is a multifunctional protein endowed with protease, helicase, nucleoside triphosphatase (NTPase) and RNA 5' triphosphatase (RTPase) activities. Helicase activity of NS3 catalyzes the unwinding of double stranded polynucleotides by utilizing the energy released from ATP hydrolysis. As this activity is essential for replication, NS3 helicase represents an attractive drug target for developing a dengue antiviral drug. Here, we report fluorescence based molecular beacon helicase assay using a duplex RNA substrate that contains a fluorophore on the 5' end and a quencher on the 3' end of one of the strands. The assay was optimized with respect to several parameters and adapted to 384-well high-throughput screening format, with an average Z' factor of 0.65. Assay validation with a small diverse set library of 1600 compounds identified, suramin as a significant inhibitor of the helicase activity of NS3. Helicase activity deficient NS3 K199A was used in a counter-screen to identify compounds interfering with the assay. Suramin inhibited DENV (dengue virus) NS3 helicase activity with a Ki of 0.75±0.03μM as a non-competitive inhibitor. The molecular beacon helicase assay together with the counter screen and suramin as a tool compound can be used to identify novel inhibitors of DENV helicase.
https://www.medscape.com/medline/abstract/25281902
-------------

Suramin is a 100-year-old drug developed to treat African sleeping sickness and river blindness. Though it has been investigated for other diseases, including cancer, it is not approved for any therapeutic use in the United States.

However, a small, randomized clinical trial conducted by Robert Naviaux, MD, PhD, professor of medicine, pediatrics and pathology, and colleagues at University of California San Diego School of Medicine have found that a single intravenous dose of suramin produced dramatic, but transient, improvement of core symptoms of autism spectrum disorder (ASD). Currently, there are no drugs approved for treating the core symptoms of ASD.

More broadly, the trial findings support the “cell danger response theory,” which posits that autism and other chronic conditions are fundamentally driven by metabolic dysfunction—and thus treatable. Naviaux and his co-authors propose larger, longer clinical trials to assess suramin (or similar drugs) as an ASD treatment.

Robert K. Naviaux, MD, PhD, professor of medicine, pediatrics and pathology, and co-director of the Mitochondrial and Metabolic Disease Center at UC San Diego School of Medicine, led the study that tested suramin in children with autism spectrum disorder.

Naviaux, who is co-director of the Mitochondrial and Metabolic Disease Center at UC San Diego, believes that ASD — and several other chronic conditions, including chronic fatigue syndrome and some autoimmune disorders — are caused by metabolic dysfunction or impaired communication between cells in the brain, gut and immune system.

Specifically, this dysfunction is caused by abnormal persistence of the cell danger response (CDR), a natural and universal cellular reaction to injury or stress. “The purpose of CDR is to help protect the cell and jump-start the healing process,” said Naviaux, by essentially causing the cell to harden its membranes, cease interaction with neighbors and withdraw within itself until the danger has passed.

“But sometimes CDR gets stuck,” Naviaux said. “This prevents completion of the natural healing cycle and can permanently alter the way the cell responds to the world. When this happens, cells behave as if they are still injured or in imminent danger, even though the original cause of the injury or threat has passed.”

At the molecular level, cellular homeostasis or equilibrium is altered, creating an abnormal cellular response that leads to chronic disease. “When this happens during early child development,” said Naviaux, “it causes autism and many other chronic childhood disorders.”

Suramin works by inhibiting the signaling function of adenosine triphosphate (ATP), a nucleotide or small molecule produced by cellular mitochondria and released from the cell as a danger signal. When CDR is activated, the effect of extracellular ATP is similar to a warning siren that never stops. Suramin inhibits the binding of ATP and similar molecules to key purinergic receptors, according to Naviaux. It silences the siren, “signaling the cellular war is over, the danger has passed and cells can return to ‘peacetime’ jobs like normal neurodevelopment, growth and healing.”

“There is evidence, gathered over the past 10 to 15 years, that children with ASD can exhibit oxidative stress, an outcome of the cell danger response,” said Pat Levitt, PhD, Simms/Mann Chair in Developmental Neurogenetics at Children’s Hospital Los Angeles and W.M. Keck Provost Professor in Neurogenetics at Keck School of Medicine of University of Southern California. “This can impact how well neurons and circuits function. Why this would impose problems on certain circuits that mediate specific behaviors, such as social communication, is unclear, but this is why understanding how genetic risk and environmental factors combine to increase risk for autism spectrum disorder is important.”

Re: Suramin as a possible novel treatment for Autism

Purinergic signalling (or signaling: see American and British English differences) is a form of extracellular signalling mediated by purine nucleotides and nucleosides such as adenosine and ATP. It involves the activation of purinergic receptors in the cell and/or in nearby cells, thereby regulating cellular functions.[1]

The purinergic signalling complex of a cell is sometimes referred to as the “purinome”. 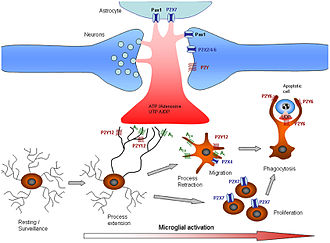 Microglial activation in the CNS via purinergic signalling

In the central nervous system (CNS), ATP is released from synaptic terminals and binds to a plethora of ionotropic and metabotropic receptors. It has an excitatory effect on neurones, and acts as a mediator in neuronal–glial communications.[32] Both adenosine and ATP induce astrocyte cell proliferation. In microglia, P2X and P2Y receptors are expressed. The P2Y6 receptor, which is primarily mediated by uridine diphosphate (UDP), plays a significant role in microglial phagoptosis, while the P2Y12 receptor functions as a specialized pattern recognition receptor. P2RX4 receptors are involved in the CNS mediation of neuropathic pain.[33]

In the peripheral nervous system, Schwann cells respond to nerve stimulation and modulate the release of neurotransmitters through mechanisms involving ATP and adenosine signalling.[34] In the retina and the olfactory bulb, ATP is released by neurons to evoke transient calcium signals in several glial cells such as Muller glia and astrocytes. This influences various homeostatic processes of the nervous tissue including volume regulation and the control of blood flow. Calcium signaling evoked by purinergic receptors contributes to the processing of sensory information.[35]

During neurogenesis and in early brain development, ectonucleotidases often downregulate purinergic signalling in order to prevent the uncontrolled growth of progenitor cells and to establish a suitable environment for neuronal differentiation.[36]